Due to the prevalence of diabetes, hypertension, obesity, multi-generational households and poor living conditions, American Indian and Alaska Native people living in urban settings may be dangerously vulnerable to COVID-19. And for these individuals, the risk may be even greater because their access to health care facilities located on reservations is limited. But targeted testing in these communities has been virtually nonexistent, so the severity of the crisis remains unknown.

To meet this threat, a new multi-center project has been launched by IREACH director Dr. Dedra Buchwald, in collaboration with Dr. Rich MacLehose of the University of Minnesota and Dr. Spero Manson of the University of Colorado Anschutz Medical Campus. Funded by a $4.4 million grant from the National Institutes of Health, the project will partner with Urban Indian Health Programs in Albuquerque, Anchorage, Denver, Minneapolis, Seattle, and Wichita. Researchers will assess levels of testing and challenges that prevent urban American Indians and Alaska Natives from getting tested and vaccinated. The aim is to generate creative solutions and fund new resources to increase testing and limit the spread of COVID in these vulnerable populations.

Type 2 diabetes is a serious global epidemic that disproportionately affects disadvantaged populations. American Indians and Alaska Natives (AIs/ANs) have the highest rates of diabetes in the nation with a prevalence of 14.7% in 2018, more than twice that of non-Hispanic Whites. AI/AN men have the highest prevalence of diagnosed type 2 diabetes (14.5%) compared to non-Hispanic Black (11.4%), non-Hispanic Asian (10.0%), and non-Hispanic White (8.6%) men. Several landmark clinical trials have shown that lifestyle interventions can effectively prevent or delay the onset of diabetes among those at risk, including in AIs/ANs. Despite positive outcomes for AIs/ANs in these studies, very few were men. Read more.

This study used a parallel, convergent, mixed-methods design with TribalCrit theory and intersectionality as analytical frameworks to identify how the identities of American Indian men intersect with broader structures and systems in shaping their eating and physical activity choices and behaviors, and in eliciting recommendations for a men’s lifestyle intervention. Read more (pdf).

Native people are among the least likely to be tested for the coronavirus. There are several reasons for that, including lack of access to health care.

A team led by a Washington State University medical professor has won a federal grant to reach out to Native American communities and try to increase testing.

Dr. Dedra Buchwald says Native people have several things going against them when it comes to Covid. Listen here.

SPOKANE, Wash. –  American Indian and Native Alaskan populations have been hit hard by the pandemic—exactly how hard, no one can say for sure, since there is a lack of information and testing in these communities.

A new project led by Dr. Dedra Buchwald, a physician and professor with WSU’s Elson S. Floyd College of Medicine, has received a $4.4 million National Institutes of Health grant to help address that knowledge gap and bring resources to curb the COVID-19 crisis within these populations.

“Many things come together to make American Indians and Native Alaskans particularly vulnerable to COVID-19, and at the same time, make them hesitant to participate in efforts to get tested and get vaccinated,” said Buchwald, who is also the director of the Institute for Research and Education to Advance Community Health or IREACH.

This grant is one of four recently received by College of Medicine researchers to help deal with aspects of COVID-19 crisis. The others include:

The National Institutes of Health grant is intended to help address health disparities among underserved and especially vulnerable Native populations in urban settings. An estimated 71% of American Indians and Native Alaskans live in urban areas. Buchwald said these populations have many risk factors, including a high prevalence of diabetes, hypertension, obesity, multi-generational households and poor living conditions. Many also struggle with poverty and limited access to quality health care and education.

This is complicated by a distrust in the federal government and health care systems, given the long history of atrocities committed against Native peoples, such as the deliberate dispersal of blankets laden with smallpox and sterilization of Native women without true consent.

The partners will work to understand who has been tested already and what challenges exist to getting people tested and ultimately vaccinated. The grant will also fund new resources for each site to help promote testing depending on their locally determined needs. Some sites might need PPE or testing kits while others may want to establish a testing drive-through site or send out case workers or COVID navigators to make contact with individuals.

Most of the people working on this project at the health programs will be from the tribal communities they serve, Buchwald said.

“American Indian and Native Alaskan people are more knowledgeable about what is going on in their communities than outside researchers, and we want to make sure that we have good trusting relationships,” she said. “Our partners are really key to encouraging more people to get tested, and in the future, vaccinated, if determined to be desirable.”

We are only at the end of the beginning. This, from the New York Times:

Redskins to Drop Name, Yielding to Pressure from Sponsors and Activists

“The N.F.L. team in Washington announced the move on Monday and will continue its search for a new name and logo.”  Read more.

This presentation will provide an overview of the study design, methods, and primary outcomes from the Safe Passage Study – the largest international prospective study looking at the relationship between prenatal alcohol exposure, stillbirth and sudden infant death syndrome. Unique cultural and ethical aspects of conducting research in American Indian communities will be highlighted. Finally, strategies for dissemination of results in scientific and non-scientific communities will be presented.

Featuring Dr. Amy Elliott, Chief Clinical Resource Officer for Avera McKennon Hospital and a Professor/Co-division Chief in the Department of Pediatrics, University of South Dakota School of Medicine, and Ms. Jyoti Angal, the Director of Clinical Research for the Avera Center for Pediatrics and Community Research and project director for the Safe Passage Study 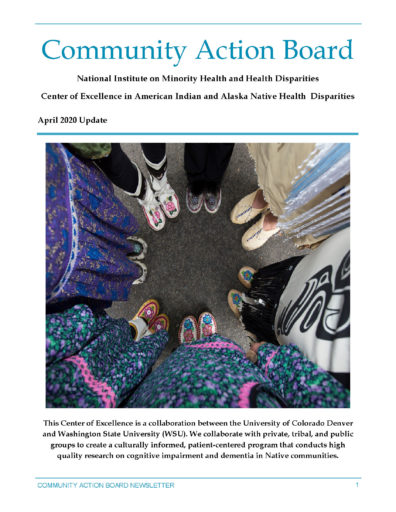 Our quest for knowledge goes beyond borders to find the seekers who, with us, can make a positive difference in the lives of others. Washington State University and the University of Colorado Denver collaborate on the Center of Excellence in American Indian and Alaska Native Health Disparities. Read about its vital work in this latest newsletter from the Community Action Board.